Matthijs Leffers has been making music all his life. He began with the piano and started with his first brass instrument in the age of 8. When he was 11 he started playing the Tuba, with which he now tries to separate and develop himself as a musician and show the tuba to as many people as possible.

Matthijs also is a member of the Gustav Mahler Jugendorchester.

Matthijs won in September 2017 the VNO-NCW Nortern Talent Award, which is awarded to a young musical talent from the Northern Netherlands every year. A half year further(February 2018), Matthijs has won – as first tubaist ever – the prestigious Grachtenfestival Conservatorium Concours.

Matthijs has been awarded with:

These prices drives Matthijs even more, to search for new ways to play the Tuba and reach an even bigger audience.

At the moment, Matthijs is in Hannover to study his master with prof. Jens Bjørn-Larsen. 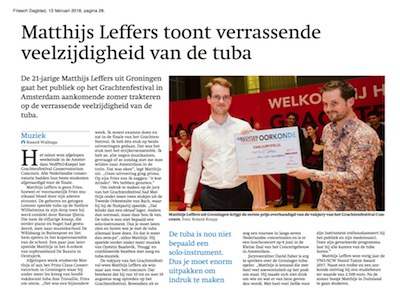